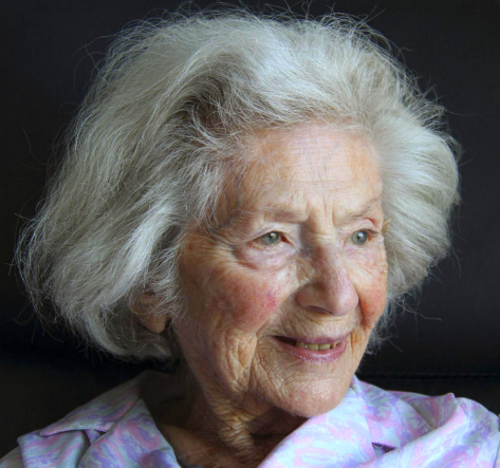 I watch Ata struggle with her blankets. She has returned from one of her numerous trips to the bathroom, trying to settle back in her recliner close to the window. My sister Juliette moved it there on her last visit, so that Ata can look out, although she cannot see much any more. Just spots, she says. My mother has grown thinner and smaller since last September. When she shuffles across the room, leaning on her wheeled walker, her hunchback is now so prominent, that she has difficulty looking straight ahead.

She breathes heavily, groans and sighs until she finally settles in her usual comfortable position. Then, her sweet smile returns and she is ready to engage with the world, which is now me, on my latest visit from America.

It’s a beautiful Dutch spring day and I ask Ata if she would like to take a ride to the beach that afternoon. But even brief day trips are no longer part of our routine. Her world is reduced to trips to the bathroom and to her bed at night.

A few years ago, when she was only 96, we could still go on overnights together to places like the Ardennes. As the years passed, our trips got shorter, but my visits to Ata were always fused with the joy of driving through beautiful Holland together.

This time it is different. Ata no longer leaves her recliner. She no longer reads, listens to music, or watches TV. She cannot smell the blooming cherry trees in front of her large bay window. Her extreme old age has sneaked up on both of us, as one by one, her senses have abandoned her.

She is a 103, you see, and the walls are closing in on her. But her mind has hardly changed, so she is doomed to witness her own physical decline, like a powerless bystander.

What keeps someone alive for so long? I believe it is mostly due to Ata’s incredible ability to see things with rose-colored glasses. This has served her well in her long and rich life. She experienced the horrors of two world wars and the death of her younger sister. She lived in extreme poverty in post-war Paris, as she was trying to raise a family as a single mother.

Now that she is a centenarian, this ability to turn lead into gold is what keeps her going. Like the Duracell Bunny, she marches to the beat of her own drum. The world could come to an end tomorrow and Ata would sit there, smiling and unperturbed, softly tapping her fingers on the armrests of her recliner.

Since she no longer hears or sees the world as it really is, her rose colored glasses are permanently perched on her nose. She has made peace with negativity, unpleasant memories and has no fear of the future. The present feels like the slow cadence of a moving train, although it is often jolted by bouts of pain.

Ah, pain. That is one constant in Ata’s life. There are no distractions from its oncoming ebb. It is in her foot, in her back and her skin. Suppositories and Paracetamol bring temporary relief, but when pain enters her bedroom in the middle of the night, she often wishes that someone were there to share it with her.

I am eager to know what makes Ata tick after all this time, so we play a game where I ask her questions:

Does she sometimes feel angry at being so old? ‘When I hurt or when I cannot hear what is being discussed’ she says. She is also angry because the only pictures she can take are the ones in her head, complete with composition problems, which she tries to solve.

She is afraid of getting older, because every day gets harder. Sometimes, when it hurts, she wants it to be over, quickly. ‘My body is stronger than my mind’ she says. ‘It calls the shots. It is like a selfish, cruel dictator who wants the rest of me to obey its every command.’ She doesn’t wish extreme old age on anyone. ‘It is not for the faint hearted’, she says and laughs.

So you are not afraid of death, I ask. ‘No. There will either be nothing or something better. I don’t want to believe that there is a hell or heaven.’

Aren’t you afraid of nothingness? ‘Nothingness cannot hurt you. It’s the absence of pain that I like. And I believe, somewhat, in the eternity of the soul.’

I want to know what she enjoys during her days in her recliner. Watching the birds, she says. ‘I see them because they move. I hear them and I talk to them. They tell me that my mother is present, around me. Something like telepathy. I sometimes ask the birds to tell you, far away in America, that I think of you.’

She often tells me that she thinks about the past as well as the future. What does she think about when she thinks about the future? ‘It’s a bit like science fiction. The future of the world and me in it, like a dust particle. Like the waves, the birds, the eggs I eat every morning. But it’s all one big question mark. All I know is that I hope, I feel that death is a relief. Nobody can give me shit any more.’

Isn’t she a bit proud of being so old? ‘No. I don’t understand why people admire me because of my age. The only brave thing I do, is force myself to eat, to stay alive. All my other activities are useless, except my thoughts. Going to the bathroom, struggle with my diapers, trying not to throw up, losing my balance, none of it has any value. It’s of no interest, neither to me or to anyone else.’

Does she sometimes feel lucky that so many people are looking after her? ‘Yes I am lucky. But it’s not because of the people; it’s because of circumstances. Like the time when I was invited over for dinner at a friend’s house in Budapest, during the war. I decided to go back home instead of stay the night and that night the entire building was blown up. Everybody was dead, including my friend.’

‘I feel lucky having all these friends: Thomas Swinkels, Marja, Antoinette, Bert.. They like me, I don’t know why. Tom says it’s just because of who I am.’

I was more thinking of all the help she gets through elder care. Do you find that normal, I ask her? ‘Yes, they are getting paid for their services. I know what that kind of work is like. I have done it.’

Who did she do that work for? Clean people’s excrement, bathe them, and feed them? ‘When I was recovering from tuberculosis at the Sanatorium in Hungary. Besides I feel I am entitled, because of my age. I stopped feeling guilty about asking for things a long time ago. It’s a matter of survival.’

I want to know if she feels that her children have helped her. ‘Not really, except with my photography.’ Didn’t Tom, (my brother) and Juliette help you, all those years you lived with them in California and the Isle of Wight? Ata’s thoughts drift away.

How did we help her with her work? I want to know. It wasn’t exactly voluntary, since we were children. ‘We didn’t have a choice. I didn’t have a choice. Had I done some other type of work, like cleaning houses, I would have spent less time with you guys’. So she did her photography for her children? ‘Yes, I wanted to be with you. I would have given you less of me, had I done something else.’

Ata has often spoken of the possibility of Euthanasia. Did she know that Jewish law regards euthanasia as suicide, as murder? ‘Yes, it bothers me because I believe that too. But the exception is, if someone suffers too much. Like Lisou’s father, who was tortured by the communists and then was promised his freedom if he signed a confession. He shot himself in the head as soon as he was outside of the interrogation building.’

What makes us so incredibly arrogant, to think that extreme old age is a one-dimensional, easily dismissed phenomenon? Fear of being old makes us, the young and middle-aged, see the very old as ‘the other’, another species. ‘Oh, I will never be like Ata’, my thinking goes. I couldn’t be like her, any more than I could be a cat. My self-image won’t allow me to think that I could ever be that hard of hearing, unable to control my bowels, unable to read and write. Where does this idiotic self-deception stem from?

Maybe Woody Allen was right, when he said: ‘Old age sucks, but I prefer it to the alternative.’