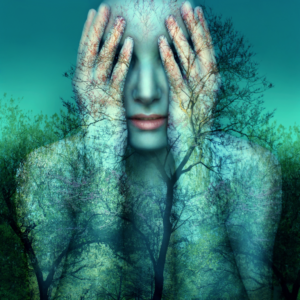 The winter is finally over in this little corner of the world I call home.

As May turns into June, I look out on a deep green backyard. The traffic to our birdfeeders is so dense, that the cacophony of bird calls sounds like an orchestra warming up before a concert. Actually, birds are quite civilized about birdfeeder etiquette – as long as they are from different species. But a warbler’s nephew will have to fight his uncle beak and claw, while a complete stranger will be allowed to feed right next to him.

At the crack of dawn, I put on my garden boots, and walk through the French doors into the morning dew. A small red squirrel hops out from under the hydrangea bush. He is making a run for the bird feeder. He stops, grabs a seed and rapidly turns it around in his paws, spits out the hull and stuffs the rest in his mouth. With jerky, quick movements, he buries more nuts, but in the course of the day, he forgets where he put them and will frantically search for the lost treasure.

Two tom turkeys appear, tails fanned out, the iridescent color of their feathers reminiscent of knights in shining armor. They puff themselves up to the point of bursting, vying for a female’s attention. She is busy picking seeds out of the ground, indifferent to their extravagant display.

A red tailed hawk, so still, until he swoops down to catch a pigeon in mid-flight. He stomps on its prey with its powerful claws, feathers flying, blood gushing, He waits patiently, until slowly, the convulsions begin to subside and the pigeon is finally motionless. Then, his beak still dripping blood, he opens his enormous wings and soars up in the sky with a piece of dead flesh dangling from his claws.

In my raised beds the beans and peas have grown tentacles that are trying to reach to the sky. The tomato plants crowd each other out, competing for sunshine. As I slowly walk by them, like a captain reviewing the troops, I pick off the suckers, caress the cucumber leaves to encourage them to grow.

I sit down on my little garden stool and as the soft morning sunshine warms my shoulders, I slowly pull out some weeds. I want this moment to last forever. Weeding is like plucking off all the misery that this world contains.

I suddenly feel a faint tingling sensation and see that a morning glory tendril has delicately started to curl around my right leg. Impossible at this fast rate, I am thinking. I feel the softness of the minuscule hairs on my bare skin, as it slowly makes its way up. Instinctively, I pull away and the vine falls limply to the ground.

Suddenly, a bright red cardinal settles on one of the grape vine leaves and looks at me with his head cocked to the side. His crest is up and makes him look like a Buckingham Palace guard. He starts his two-tone song, inflating himself to twice his size. I look for a female. Yes, there is one higher up in the birch tree. She sings back to him and they begin their morning conversation. Life is simple at that moment. Simple with so much hidden complexity. The silence compels me to listen, and I find meaning in this wordless world.

Now, another vine has fancied my left arm. The softness is irresistible. Like a snake charming its prey, I am unable to move. My arm is now held up, not by my muscles but by the vines that are entangling themselves, reaching for my shoulder. One flower, spiraling as it opens into a beautiful purple morning glory, has emerged from one of the vines close to my elbow. Another and another are now sprouting from my arm that feels like it is no longer mine.

One simple movement would make me pull free. I see a hummingbird hover over my entwined arm, unable to decide which flower to pick for breakfast. His needlelike beak disappears in the purple flower, as it hovers motionless in the air. Then, like a miniature helicopter, it suddenly veers off and disappears into the distance.

The vines have now reached my shoulder and they slowly start to move across my back and neck. This has gone too far. I am about to rip the whole structure apart, when a magnificent monarch butterfly settles on my other arm, folding its large orange and black wings neatly together. It is only a few inches from my face.

Motionless now, it must be wondering what kind of strange pink plant he landed on. I see every detail of the complex pattern of his wings, its polka dot head and pitch black eyes.

I feel the vines across my back reach for my other arm. It is time to break the spell and wake up from this beautiful day dream. I stand up and my elaborately constructed garment falls to the ground. A large pile of what looks like discarded weeds lies at my feet and I step over it, like a bride-to-be at a bridal gown’s fitting.

‘Look at those indentations on your leg’ my husband says, as I walk back into the cool darkness of our house. ‘You must have been sleeping deeply’. The serenity of a few seconds ago is gone. Did I suffer a mild sun stroke? I go about my day, not able to concentrate much.

The next day, my morning ritual takes me back to the garden. The tomatoes are standing at attention, the scent of the lilac trees is intoxicating. Again, I feel a tug as I sit on my little garden stool, but this time the vines have entangled my right foot. I do not resist as they encircle my ankle and gently pull my foot down into the warm, damp soil. The vines slowly climb up my leg. The pull is stronger this time. I am spellbound and don’t want to wake up from what I am convinced is the most vivid dream I’ve ever had.

Both my arms are now covered with vines, merging into one, as they climb at this unnatural speed, towards my neck. At some point, I am no longer carrying my own weight, one foot firmly planted in the soil, the other just dangling in the air, serving no purpose.

All I want to do is stay asleep. Stay here, covered with leaves, entangled in vines, sprout beautiful purple flowers. But it is time to wake up. I need to free both my hands so I can pull my foot out of the ground, but the vines resist. I put my dangling left foot firmly on the ground, pull with all my strength and finally get myself untangled.

My husband is reading the paper and doesn’t look up when I enter the house. I go to the bathroom, wash the dirt off my foot.The indentations in my leg are pronounced and blend with the green residue on my skin that doesn’t come off.

As the sun sets that evening and I sit on the bench outside, listening to the breeze and the distant hum of the world passing by, I long for the sense of complete union that I experienced that morning. Finally, morning arrives. My heart beats faster as I sit on my little garden stool, waiting for the dream to reappear.

Like a spotlight on a stage, the sun slowly illuminates the garden, as it pushes out the morning shadows. The morning glories have been waiting impatiently for the first rays. They were waiting for me too. This time they rapidly take hold of both my feet, plant them firmly in the soil. The vines lift me up by my arms and cover my entire body with their tenderness. I feel tendrils grow from all parts of my now superfluous skin, reaching for whatever will support them.

My husband is done reading the paper, ready to do his own round of the garden, watering, pruning, cutting dead branches.. He looks for me. He waters the garden beds, brushes against this large cluster of morning glory vines. He stops, admires the abundance of pink and purple flowers and moves on, wondering where I disappeared to. leave comment here