Will the Real Bambi Please Stand Up 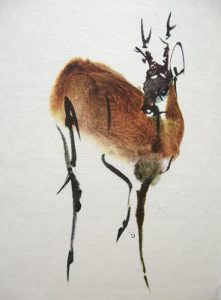 The first time I saw Bambi, I was nine years old. Ten minutes into the movie, I had to leave the theatre, unable to handle Bambi’s mother being shot. It took another 5 years before I mustered the courage to watch the movie in its entirety.

You can say a lot of things about Disney, but he was a master puppeteer at manipulating his audience’s emotions, young and old. He was also an incredibly clever businessman who plagiarized most of his stories, including Bambi.
I found this out when I recently discovered the original Bambi story. It is written by Felix Salten, a Hungarian Jew, whose original name was Sigmund Salzmann. Like many Jews in the Austro-Hungarian Empire, (including my own grandfather) he changed his name to be more accepted by the society around him.

He lived in Vienna, which was the center of European culture in those days and became quite famous as a writer and critic. His most famous work: ‘Bambi, A Life in the Woods’, is a masterpiece if you ever read one.

Contrary to Disney, Salten was a terrible businessman. He sold the movie rights to his story for a mere $1000 to MGM producer Sidney Franklin, who in turn, sold it to Disney. The rest is history.

After having read the original, part of me feels that, although Disney’s Bambi deserves a place in history for having captivated the hearts of millions of viewers, it has also overshadowed one of the most beautifully written stories I know.

From the first page to the last, Salten’s love for nature is apparent. He has such mastery over his prose that the reader becomes one with Bambi’s world, often through the eyes of the many creatures that he encounters. We witness Bambi’s birth through the eyes of a magpie, a real chatterbox who won’t stop asking questions of the exhausted mother deer, who is too polite to protest.

Unlike Disney, Salten doesn’t gloss over the cruelty in nature, of life being taken for life to continue. On his first walk, as a wobbling infant, the young fawn witnesses a weasel killing a mouse. Bambi asks his mother if they too, will kill a mouse. But he is told that deer ‘never kill’.

From the outset Salten shows us how gentle deer are and as a consequence, are in constant danger for their lives, not from other predators, but from ‘Him’, the ever-present menace of Man.

Like a benevolent but firm guide, Salten takes us into the world of nature, opening our eyes to the inevitability of life and death. In a heart-wrenching paragraph, two leaves on an old oak tree, discuss death in the guise of the approaching winter, until one by one they fall to the ground. It is impossible to not feel compassion for them, imbued as they are with human feelings and thoughts.

The story describes Bambi’s coming of age. This transformation is more suspenseful than any whodunit. We follow him as he goes through the stages of his life from a needy fawn, to his feelings for Faline as he becomes a young adult, until he finally fulfills his destiny as a lone stag whom other deer do not dare approach. He has become the king of the forest, a legend and will be alone for the rest of his days.

There is a marvelous description of animals that have made a pact with ‘Him’. A young deer by the name of Gobo has become domesticated and feels no danger from man. Until he also gets hunted, showing that He cannot be trusted, no matter how much you give in.

Analysts have hinted at an analogy between Salten’s experience as a Jew in Eastern Europe and this masterpiece. Is the book meant as an allegory? The recurring theme throughout the book is how man hunts the deer. Do they represent the Jewish persecution by the Nazis?

The Nazis certainly thought so. The book was banned and Salten himself had to escape to Switzerland where he remained till his death.

Salten was a Zionist and very much against the concept of assimilation. In one chapter, a dog is hunting a wounded fox, who finally turns and says: ‘we are brothers, you and I. Let me go home. Let me die with my family at least.’But the dog refuses. ‘His maimed body was taut with contempt and hatred. “You spy”, he hissed, “you turncoat, you track us where He could never find us. You betray us, me who am almost your brother. And you stand there and aren’t ashamed!” 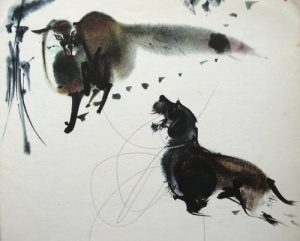 How can you not think that Salten is talking about the many Jews who tried to assimilate or worse, collaborate with the Germans?

After reading this book, I felt weak in the knees. It wasn’t so much Salten’s description of how so many innocent creatures live a hard life and ultimately die, but the way they react to this reality. Every chapter is like a new adventure. Bambi’s mother doesn’t die; she is just gone one day. Bambi has to accept this. His father’s death is much more gripping, but in the end, it is the pure joy of reading about nature and animals in such a realistic, yet enchanting way. Disney’s Bambi pales in comparison.